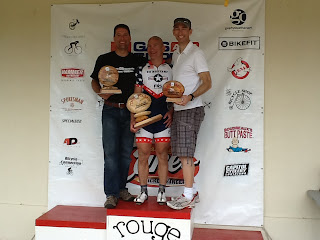 Brownie and Emerson's strong effort at Rouge Roubaix follows their strong showing two weeks ago at Texas racing's little taste of Belgium -- the Walburg road race. Both Russ and Brownie pulled double duty at Walburg. Russ started the Cat 3 race before offering tremendous support to MV's Masters team in the 40+ race. While Russ was racing with the 3s, Brownie was starting ... and finishing (24th) the 72 mile P/1/2 race. Brownie then bridged up MV's Tim Brandish in the the winning break before taking 2nd to the always strong John Korioth in the 40+ race that started right after the P/1/2 concluded. Just behind the winning break, the 'Seabass' Brad Price was leading out Smokin' Joe Howard for 5th overall. Another fine day for McKinney at Walburg. And a precursor of things to come for Brownie and Emerson at Rouge Roubaix... and perhaps at the Tour of the Battenkill too.
Posted by Doc at 5:16 PM