File under the heading "Joan Stepler is a stud!"

This comes courtesy of MVC's Super Dave Millwee, a Tri Stud in his own right: Congrats to Joan Stepler who finished 4th in her age group at Ironman Lake Placid and got a very hard-to-come-by slot to the Ironman World Championship in Kona Hawaii!! We'll see you on TV! IN FREAKING CREDIBLE!
Posted by Doc at 11:29 AM 1 comment:

MVC's Tri Team played in our backyard Saturday. Did someone predict "carnage?" Someone was right!!

On behalf of myself, I'd like to nominate Jens Voight for honorary MVC Team Captain. His credentials, as first reported by The Street Kings from the upper West side of Old Town Scottsdale, as as follows:

Jens Voigt doesn’t read books. He simply attacks until the books relent and tell him everything he wants to know.

Waldo can’t be found because Jens dropped him on a hill training ride… on K2.

Jens doesn’t spin or mash the pedals… he kicks them into submission.

Jens Voigt climbs so well for a big guy because he doesn’t actually climb hills; the hills slink into the earth in fear as they see him approach.

If you are a UCI ProTour rider and you Google “Jens Voigt,” the only result you get is “it’s not to late to take up Football, Fred.”

Jens was a math prodigy in elementary school, putting “Attack!” in every blank space on all his tests. It would be the wrong answer for everybody else, but Jens is able to solve any problem by attacking.

Jens’ testicles are bald because hair does not grow on a mixture of titanium, brass, steel, and cold, hard granite.

Eddy Merckx was actually a neo-pro at the same time as Jens, but Jens dropped him so hard that he shot backwards in time to the 1960’s, where he became a great champion.

Jens once had a heart attack on the Tourmalet. Jens counterattacked repeatedly until he kicked its ass.

Jack was nimble, Jack was quick… and Jens still drove him to quit racing bikes and become an ice dancing commentator on Lifetime.

If Jens Voigt was a country, his principle exports would be Pain, Suffering, and Agony.

If Jens Voigt was a planet, he’d be the World of Hurt.

Jens Voigt doesn’t know where you live, but he knows exactly where you will die.

Jens Voigt doesn’t have a shadow because he dropped it repeatedly until it retired, climbing into the CSC team car and claiming a stomach ailment.

Jens Voigt once challenged Lance Armstrong to a “who has more testicles” contest. Jens won… by five.

When you open a can of whoop-ass, Jens Voigt jumps out and attacks.

You are what you eat. Jens Voigt eats spring steel for breakfast, fire for lunch, and a mixture of titanium and carbon fiber for dinner. For between-meal snacks he eats men’s souls, and downs it with a tall cool glass of The Milk of Human Suffering.

Jens Voigt can eat just one.

The first time man split the atom was when the atom tried to hold Jens Voigt’s wheel, but cracked.

Jens Voigt doesn’t complain about what suffering does to him… but suffering constantly complains about getting picked on by Jens Voigt.

Jens Voigt can start a fire by rubbing two mud puddles together.

Jens’s tears are so tough they could be the world heavyweight mixed-martial arts champion. Too bad Jens never cries.

Jens Voigt rides so fast during attacks, that he could circle the globe, hold his own wheel, and ride in his own draft. At least as long as he didn’t try to drop himself.

Jens Voigt nullified the periodic table because he doesn’t believe in any element, other than the element of surprise.

The grass is always greener on the other side. Unless Jens Voigt has been riding on the other side in which case it’s white with the salty, dried tears of all the riders whose souls he has crushed.

IC3 and one of MVC's key sponsors, RBM, in conjunction with a very gracious host, the Cooper Fitness center, put on a first time race in our backyard (an undeveloped subdivision in Craig Ranch) on a very hot Saturday, July 11. Two other MVC sponsors also had a big presence. Aruba Sport had its display there and contributed to the primes, while SmartWater and Vitamin Water saved many of us from heat exhaustion. The course's challenging blend of technical corners and elevation changes, when combined with the heat, made for some aggressive racing. And MVC was thick in the middle of it. By my count, 20 MVC-ites toed the line at least once, and a handful of hearty (or in my case, probably foolish) souls raced more than once. Highlights were the near textbook racing tactics employed by Weber, (Bling) Burke and Price in the 40+ and Jr. Germann and Haga in the 3s, and the fine showing by Nagel and King in the 50+ race.

Chris Powers initiated an early split in the 40+ that Price and Weber quickly joined. After a 2 lap chase, Burke also bridged to what was then a 9 man lead group (the 3 from MVC, Powers, OKC's Peter Erdoes, Kurt Bickel and his teammate, Phil Wilson, Matrix's Jeff Bauer and Jorge Merle.) Soon thereafter, Patrick attacked and went solo for 2-3 laps. After he was caught, Brad countered. All the while, Steve was marking Powers, so when Powers countered Brad's move, Steve was immediately on him. With Patrick and Brad following wheels, the other 5 gave a hard chase for several laps but Powers and Steve held their 20-40 second gap until the chase gave up. From their Powers and Steve lapped the main field before Powers took the win at the line. Patrick just nipped Brad for 4th behind Erdoes giving MVC 3 in the top 5.

In the 3s, after the field had been under pressure from several racers chasing primes, notably Jeff Bauer, Luke and 2 others got a gap, and with Shane riding perfectly behind -- soft peddling through corners when he was on the front and being perfectly positioned to disrupt any chasing the rest of the time -- he was rarely more then 2 or 3 riders from the front -- the break stuck. Luke then powered up the inside to take 1st in the 3 man sprint, while Shane easily bested the main field to take 4th overall.

Check out these MVC results from track racing in Frisco on July 10... congratulations to those MVC trackies who performed so well!

http://twitter.com/mckinneyvelo
Posted by rpm at 4:44 PM No comments: 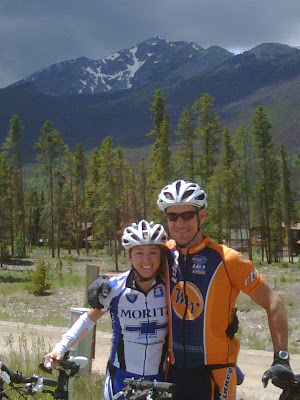