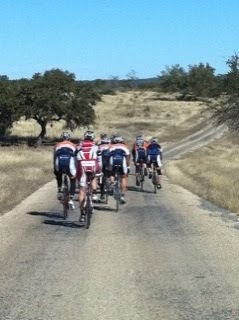 Saturday he had a solid day of road racing -- 5th in the 1/2/3 in the morning before helping launch Brandish and Hobson into 4th and 5th in the 40+ that afternoon. But on Sunday, Brownie came out ready to seize the prize Sunday. After initiating a three man break, he did just that, taking the 40+ victory. Behind, 'Seabass' Brad Price battled a trio of OKC guys before finishing a solid 7th. Congrats boys on the start of what promises to be another solid season for MV.
Posted by Doc at 2:11 PM No comments: 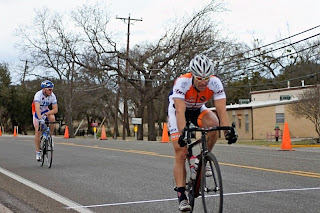 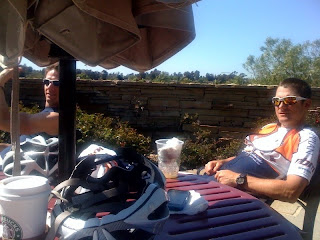 Led by typically strong efforts from Mike "Brownie" Brown (top left) and Steve "Oz" Weber (bottom left exhibiting his tried and true recovery method), a number of McKinney Velo racers made memorable 2012 season debuts on day one of road racing at Cedar Park in southwest Dallas next to Joe Pool Lake. In the early morning, bitter cold 1/2/3 race, against a very strong field, Brownie and new MV recruit Russ Emerson Fitipaldi, made the break that lapped the field on a two-mile hilly circuit. When the ice crystals settled, Brownie had finished a very respectable 5th with Russ right behind him in 6th.

With slightly warmer conditions and a wind shift predicted for day two, expect a very active MV team to make its presence felt again in day two of racing.
Posted by Doc at 10:49 AM No comments: 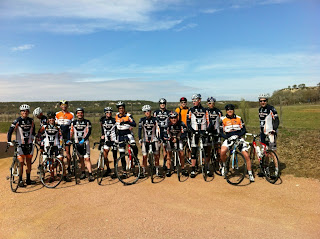 Under the good strong leadership of Jeff Fene, this group of McKinney Velo racers is enjoying the scenic roads of the Fredericksburg area by day, and sharing food, spirit and camaraderie at night. So far, the weather is cooperating and everyone is... if not in good fitness, at least in good spirits (yesterday's standoff with a rabid llama notwithstanding).
Posted by Doc at 7:08 PM No comments: